The history of herbalism dates back thousands of years. In Asian medicine, the famed, longevity Chinese medicinal herbs (called so because they grow in Asia, not because they are Chinese😜) are considered as tonics that help protect and preserve health. Some are taken every day for restoring vitality through harmonizing the opposing energies of the body’s systems.

Paul Bergner put together a nice presentation revealing the “Dark Side of Adaptogens” that is well worth a look-see before we move on. Always keep in mind, too much of anything is exactly that … Too much!

There are over 5,000 herbs in traditional Chinese herbalism with about 300 in common use. Only 60 of these herbs are considered tonics! 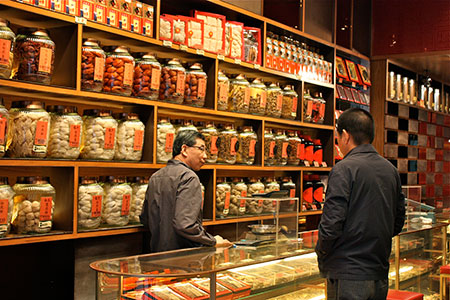 A tonic is an elite, unique class of herb that works to exert a positive, modifying influence in the body and considered balanced and safe for most people. As such, beginners without a qualified, traditional Chinese medical (TCM) therapist to guide them can experiment using tonics without concern that some form of imbalance will occur.

The whole purpose of the tonic essentially is to help the body achieve homeostasis in the first place.  It should be kept in mind that, as they are “tonics”, they are meant to and should be consumed regularly over an extended length of time for them to modulate the systems effectively and lastingly.

With that understanding, let’s take a look at some of the “classics”.  You may already be familiar with a couple of them that were covered in the post 12 Mushrooms for Dealing With Asthma.

Here are some of the most commonly used Chinese herbs to this day. Keep in mind that these are just a small sample:

Traditional Chinese Medicine (TCM) upholds He Shou Wu as one of the most important herbs in the world. Also called fo-ti, this herb of mythical lore was thought to strengthen the overall life force. This included both blood and chi, or the “energetic spirit version” of blood in a person. Thus, He Shou Wu was dubbed a powerful blood builder – with blood-building being the most potent key to promoting health and longevity combined.

Here’s How To Increase Longevity With He ShouWu. These are the Top 10 Ways He Shou Wu Can Boost Your Health and another article on How to Benefit Hair Growth using He Shou Wu.

Reishi may be one of the very best Chinese herbs for potentially supporting cancer treatment. It’s not a magic pill that immediately gets rid of the illness or remedies it entirely. But it can support one’s ability to handle it in some ways, which is a benefit recorded from healers. Here are the Top 14 Benefits of Using Reishi Mushroom.

Here’s how you can Use Reishi To Promote Healthy Aging.  Reishi mushroom may also be an amazing ally for stress, restoring calm, and promoting deep and restorative sleep. It could even be a helpful holistic supplement for anxiety, depression, and other mental health conditions, in addition to doctor recommendations.

Among people who consumed Gynostemma regularly, there were better chances of living long, healthy lives and fewer encounters with chronic illness or disease. Research shows the herb’s ability to boost longevity is owed to approximately 12 prized and research-supported health benefits of Gynostemma. It should be known too that Gynostemma may help with the relief of pain and help in relieving stress among other things.

Here are some more Ways To Help Relieve Nerve Pain.

Often featured alongside Ginseng in Chinese medical texts in many passages, this herb also appeared to hold similar powers, almost as potent as ginseng’s to a degree as a health tonic. In ancient China, it was called Huang chi, or “yellow leader”. no doubt because of its yellow flowers and bright yellow inner root.

As knowledge of its potency spread around the world, including to the United States in the 1920s, and gaining popularity in the ’80s, it became known by the name Astragalus, the name given to it by the Greeks and carried on in the Western world today. Ancient healers for thousands of years have trusted Astragalus for strengthening immunity relying only on the strong evidence-based success achieved by them using it in their practices and having learned what it can do.

Knowing that Cordyceps is an antioxidant already brings it to a deep cellular level. But that doesn’t mean that’s as deep as it gets. Studies show that cordyceps works even deeper! It could protect mitochondria, basically mini-organs or “organelles” that dwell in each cell in the body. These are important for resisting free radical damage, optimizing energy, and cleaning up dead cells.

What’s more, another study shows cordyceps could even aid the process of autophagy, a fancy term for the dead cell “clean up” our mitochondria do. What this means: Cordyceps protects the body even at the most minute level and could even help it age more gracefully. These are the Top 13 Benefits of Cordyceps.

There are 11 species of ginseng, all belonging to the genus Panax of the family Araliaceae. The botanical name Panax means “all-heal” in Greek.

The name “ginseng” is used to refer to both American ginseng (Panax quinquefolius) and Asian or Korean ginseng (Panax ginseng). The true ginseng plant belongs only to the Panax genus, so other species, such as Siberian ginseng and crown prince ginseng, have distinctively different properties.  The unique and beneficial compounds of the Panax species are called ginsenosides, and they’re currently under clinical research to investigate their potential for medical use. Both Asian and American ginseng contain ginsenosides, but they include different types in different amounts.

Research has varied, and some experts aren’t yet convinced that there’s enough data to label the medical capabilities of ginseng. But for centuries people have believed in its beneficial compounds and results.

Here are 8 Proven Benefits of Using Ginseng. Learn more now about Siberian Eleuthero Ginseng’s benefits while you’re at it too. Eleuthero is one of the most exciting and promising adaptogens today for improving energy. It may be the second most powerful adaptogen herb on the planet!

One of the reasons Epimedium gives those that eat it boundless energy is because it’s been shown to regenerate and heal nerves. 2010 brought forth a study showing that the herb could help nerves grow back, in a process called “neurogenesis.” A couple of years later in 2012, another study demonstrated that the icariin in epimedium could help restore movement in the body after a spinal cord injury. And not only that: a 2015 study brought to light that it could also reduce the chances of cognitive impairment, potentially making it effective in reducing the chances of dementia or Alzheimer’s disease.

Among those facing onset of aging, this makes epimedium an invaluable herb to have on one’s side when growing older. Read more about How To Restore the Nervous System With Epimedium.

A top-notch yang tonic in Traditional Chinese Medicine. Yang tonics are adaptogenic antioxidants, namely, botanicals that may help restore function to the body’s organs at its most minute levels, especially in terms of energy, immunity, and inflammation. When Cistanche started earning interest through research and studies, the plant’s antioxidant properties became its most recognizable asset. A 2016 pharmacological review of the herb names it a potent antioxidant, able to promote healthy cellular function (especially in mitochondria) and encourage the body’s production of its natural antioxidant stores, namely, glutathione.

Three years earlier, a 2013 study of Cistanche found that this antioxidant power was so strong, it could reverse risks for certain heart diseases.  That same year, another study demonstrated its antioxidants helping regulate blood sugars and fats—making it ripe for further research as an anti-diabetic.

Though research cannot yet prove that Cistanche can fully prevent heart disease or diabetes, nonetheless the studies so far attest to its strength as an antioxidant. Read more about how it provides incredible immune support.

For thousands of years, this little berry has been cherished throughout Asia as one of the most nutrient-dense foods. Its reputation continues to grow in the West as research develops further.  Goji berries contain 18 amino acids, vitamin A, C, and E, beta carotene, riboflavin, and more than 20 other trace minerals and vitamins including zinc, iron and phosphorous. Gram for gram, they contain more vitamin C than oranges and more iron than soybeans and spinach.

But that’s all for now. You will serve yourself very well if you immersed your cells with the goodness that the aforementioned alone will provide you with. It is highly recommended that you incorporate some of the recommended herbal formulations referred to in this post into your diet. We believe you’ll surely be happy with the results.

Hey! Maybe you want to try this Chinese Herbal Chicken Soup?  Modify it as you wish: 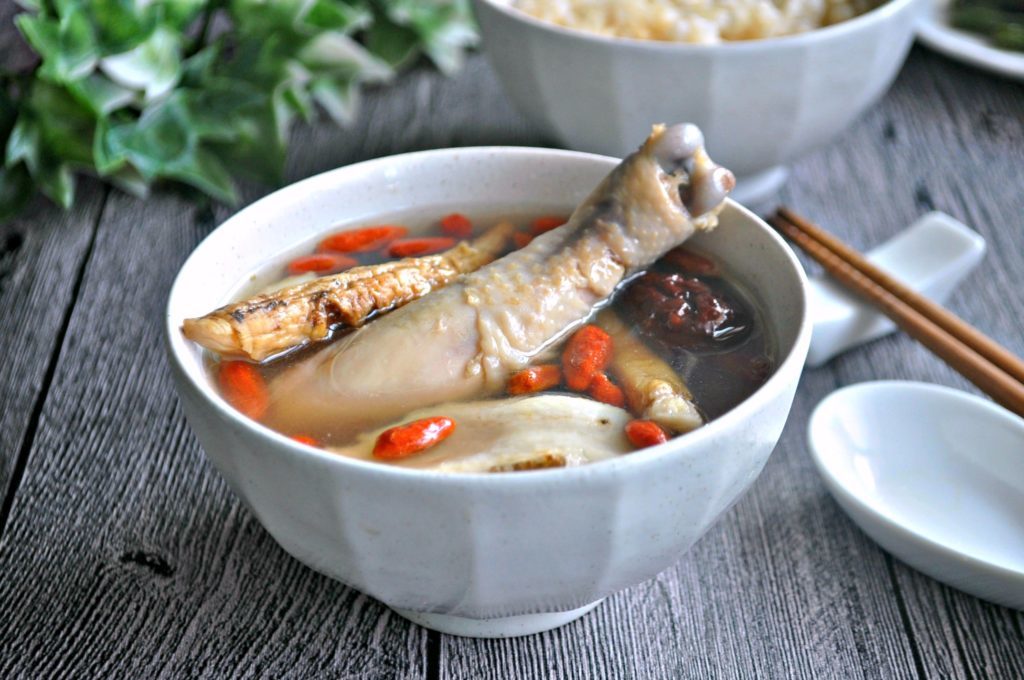 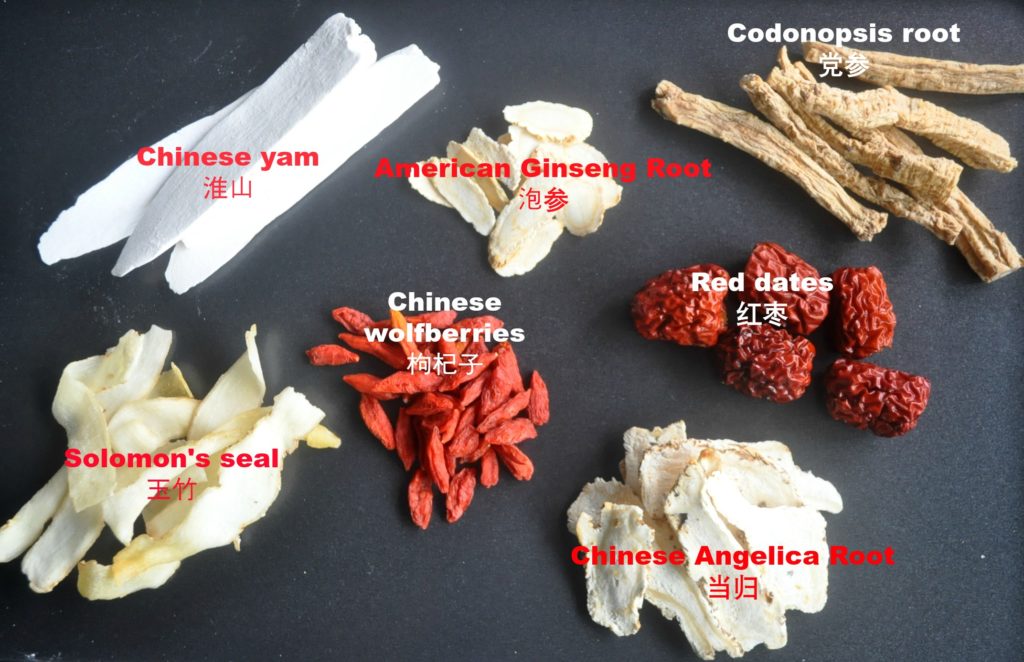 How about this PMS Relief Herbal Chicken Soup? 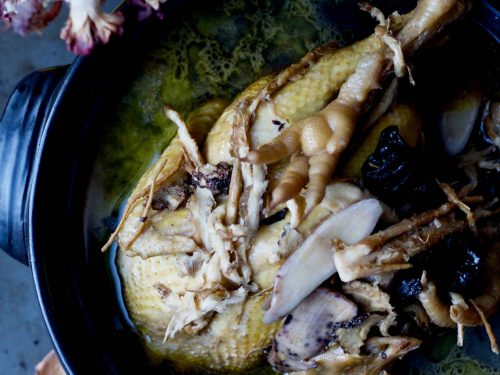 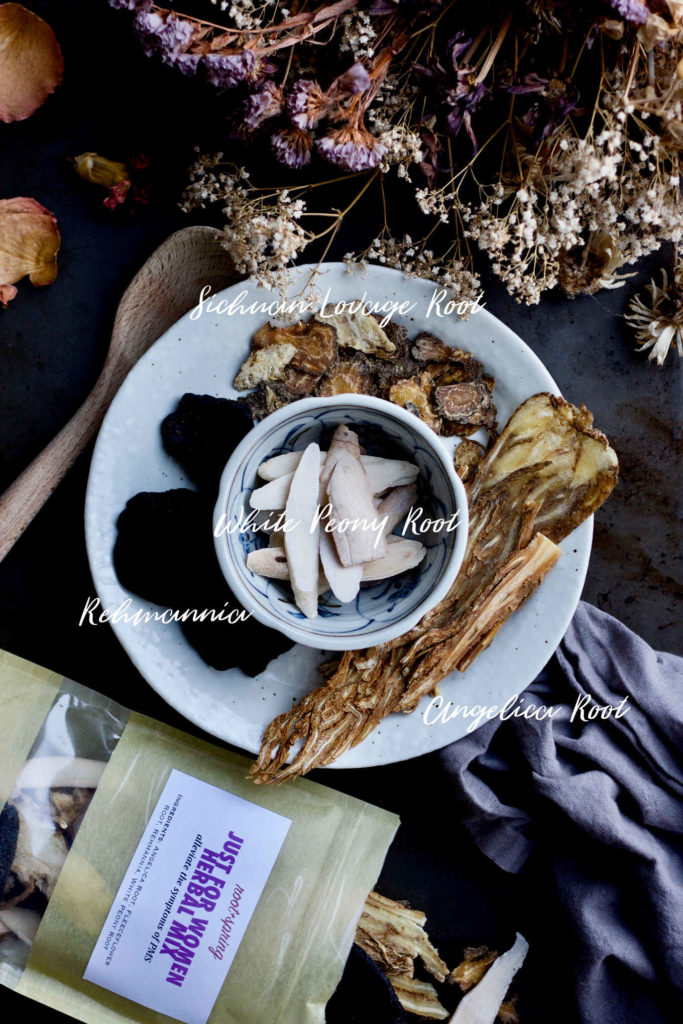 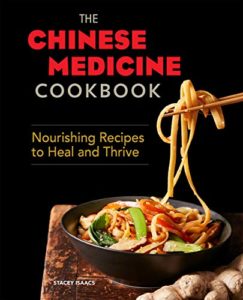 Activate Your Now! Make It Alive With Promise . . .

Whatever it is you eventually do, as long as there is no genuine harm that hurts relatives, have fun and enjoy the gifts given to you.

Food is the best medicine—Chinese food therapy is here!

Check out these videos too for a deeper understanding of Traditional Chinese Medicinal perspective: